Company Law Solutions provides an expert service for all aspects of share capital for private companies, including issuing and transferring shares, setting up different classes of shares, converting shares from one class to another, consolidating and sub-dividing shares, companies buying their own shares and reductions of capital. More practical advice is available on the Company Law Solutions website.

Many people own shares in public or private companies, and have a general understanding of what owning a share entails. Company law in England and Wales, Scotland and Northern Ireland has developed in company shares an extremely flexible system system for the ownership of limited companies. Any class or type of share can be issued, with such rights as are set out for those shares in the company's articles of association or the terms of issue of the shares. Most shares are ordinary shares but recent times have seen a proliferation of different classes of shares, including so-called "alphabet shares", for all sorts of purposes. The following is an outline of the main features of company shares.

The most commonly cited legal definition is:
'A share is the interest of a shareholder in the company measured by a sum of money, for the purposes of liability in the first place, and of interest in the second, but also consisting of a series of mutual covenants entered into by all the shareholders in accordance with (now sec33(1) of the Companies Act 2006).' Farwell J. in Borlands Trustee v. Steel [1901] 1 Ch. 279 at p. 288. The Companies Act 2006 does not give a definition.

A company set up to run a business will usually have money (and perhaps other assets) put into it by the shareholders in return for shares. E.g. A, B and C set up a company and decide that they will each put in £1,000 as share capital. The simplest way for this to be represented is for the company to issue 1,000 £1 ordinary shares to each of the three shareholders. The company's issued share capital will then be £3,000 divided into 3,000 shares of £1 each. It is not the only way. An alternative would be for the three shareholders to take one share each and to lend the money to the company. (See How many shares should a company have?)

The capital of a company limited by shares in England and Wales, Scotland or Northern Ireland must be divided into shares of a fixed amount (usually £1, but they can be any amount and in any currency). Because the company is a separate legal entity the company is regarded as selling its shares to the (prospective) shareholders, who pay for them in cash or other assets. Because the creditors of the company can usually only look to the company's assets for payment, share capital is locked into the company and can be returned to the members only subject to the strict rules of a shares buy back or reduction of capital. The shareholders are the members of the company and are the owners of it.

Shareholding is a complex system of joint ownership. The shareholders jointly own the company. At the same time a share is itself an item of property which (subject to the company's articles) can be transferred by sale or gift.
In return for investing in a company a shareholder gets a bundle of rights in the company which may vary according to the type of shares acquired. Most companies only have one class of shares (ordinary shares) but the law in the UK is extremely flexible and allows any classes of shares to be created. This is done by setting out the different rights attached to the various classes (usually in the company's articles). What rights are attached to the different classes of shares is essentially a matter for the company to determine.

The main rights which usually attach to shares are:

Company Law Solutions provides an expert service for all aspects of share capital for private companies, including issuing and transferring shares, setting up different classes of shares, converting shares from one class to another, consolidating and sub-dividing shares, companies buying their own shares and reductions of capital. More practical advice is available on the Company Law Solutions website. 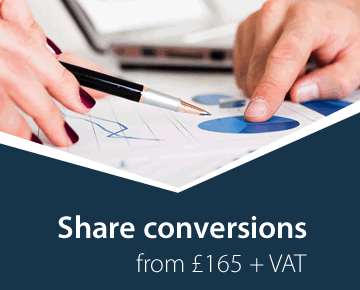