Visit our web pages on shares for a more detailed explanation.

A company limited by shares must have a share capital divided into shares. Each share must have a nominal value (sometimes called "par value"). Most shares are £1 shares, but other amounts are possible, such as 1 penny shares.

In another company, the proportions might be different. For example, the company might issue 100 shares, with one shareholder having 50 and the other two 25 each. Shares can be issued as part of the company registration or at any time in the future. It is cheaper to do it as part of the original registration.

The company may have different classes of shares. This is done for many different reasons, but simple examples are to have non-voting shares, or to pay dividends at different rates to different people. Visit our page on share classes for a more detailed explanation.

Different share classes can be set up either when a company is registered or later, but it is cheaper to do it as part of the original company registration. The details of the classes should be set out in the company's articles. The company should not be set up with just the Model Articles, which are incompatible with the main share classes. Be careful over this matter because many companies are set up with documents that are not correct on this area and expensive amendment is required later.

When a company issues shares (whether on registration or later) it sells them to the people who then become shareholders. The shares must be issued for at least their nominal amount, and the shareholder must pay the company for the shares. So if the company issues 100 £1 ordinary shares to a shareholder, he or she must pay the company £100 (or such greater amount that they have agreed) which becomes the company's share capital. Under the Model Articles this must be paid straight away, but later payment is permitted under our standard articles, and collected when the directors decide. The liability to pay the amount due for the shares is the limit of the shareholders' liability.

There is much more detail about shares on our Company Law Club website. 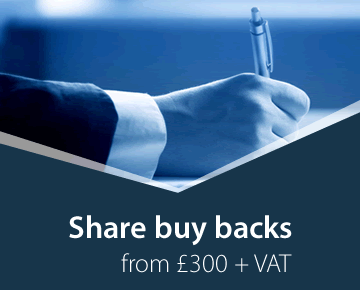